Taman Ujung or “water palace” is located near the village of Seraya in the Karangasem region, east of Bali. It is the sister site of Tirta Gangga, also built by the late King of Karangasem. The Ujung water palace consists of several large pools and historic structures set against the backdrop of Mount Agung to the north and the coastline to the south. The site was devastated by fiery clouds following the eruption of Mount Agung in 1963 as well as an earthquake in 1979. Restoration efforts over the past 10 years have given way to its present splendor for the greatest pleasure of visitors.

A real architectural gem as you only see in Bali! In the background, the sea, the mountains and the rice fields provide an extraordinary setting for this refined park. A decor that looks like paradise. 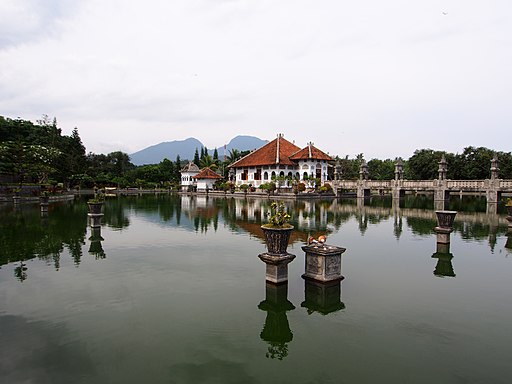 History and architecture of the Ujung Water Palace

Bali’s Ujung resort has the official name “Taman Sukasada Ujung”. It is the private property of the royal family of the late King of Karangasem.

This water palace was built in 1909 by a Dutch and Chinese architect, for the raja of Karangasem. The complex therefore combines Balinese and European architecture through its three ponds connected by bridges, steps and paths. It was founded in the same period as its neighbor the Tirta Gangga Water Palace. 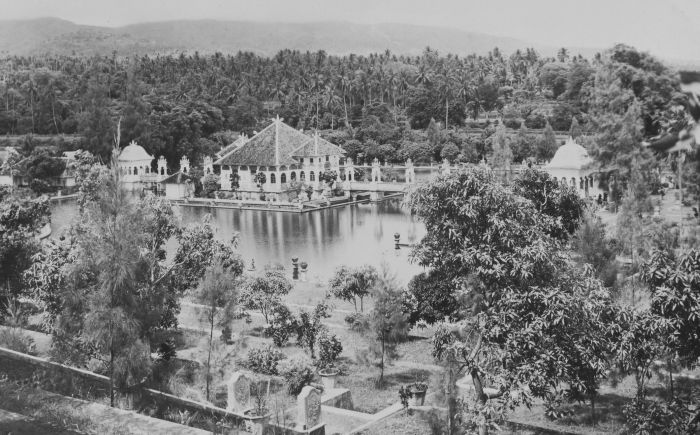 In 1963, the eruption of Mount Agung then in 1975 the earthquake severely damaged the palace which was renovated to perfection. In 1921, the Taman Ujung Royal Estate became officially open to the public and became known as a Royal Water Garden Complex.

The Ujung Water Palace has undergone many changes over time, various expansions and additions around Kolam Dirah Basin, the only pool existing at the time. This basin was a place of punishment for partisans accused of witchcraft. The Dirah pool takes its name from the legendary witch of Calonarang.

Situated in Karangasem, east of Bali.

The Ujung Water Palace is one of the most beautiful sites in Bali with its green garden and its large lawns, its large pools, its many statues and open-air sculptures, its parasols and the palace’s play of light and shadow.

Taman Ujung Soekasada’s main pool has a sculpted bridge that provides access to the “Gili Bale”, the main building set over the water.

Step inside the palace to marvel at the vistas from the windows, doorways and many walkways.

Ujung’s Taman Sukasada Palace is set against the backdrop of the majestic Mount Agung volcano to the north, the sea to the southwest, and an expanse of verdant rice fields to the east.

Many Balinese newlyweds go here for their photographs and many lovers come to hug as the breathtaking decor inspires romance. The park has very beautiful panoramas that can be reached by climbing up the steps.

You can easly spend 2 hours there or you can relax a whole afternoon there, there are even pedal boats and boats to relax on the pools.