From Bali to Komodo | Complete guide to visit the Komodo Islands in Flores, Indonesia

The Off the Beaten Track Adventure From Bali to Komodo Island

This itinerary from Bali to Komodo island is made of unforgettable adventures and discoveries: ideal for holidays with family or friends!

Between its pink sand beaches, its hikes on green hills and volcanoes, and its incredible diving spots, Komodo National Park is a real treasure for travelers in search of magnificent landscapes and unforgettable adventures. Not to mention the famous Komodo dragons, to see absolutely once in your life! Komodo National Park includes the three large islands of Komodo, Rinca and Radar as well as many other small islets that are full of breathtaking landscapes, stunning seabed and animals that you will not see anywhere else. Follow this guide to organize a successful stay in Komodo!

In 1991, the park was included in the list of World Heritage and Biosphere Reserve by UNESCO since 1977.

See Komodo, the world’s largest lizard, in their natural habitat with this tour from Bali. You’ll fly to Flores Island and cruise to Rinca Island, part of Komodo National Park, where you’ll have the chance to see the gargantuan creatures up close. This package includes two nights of accommodation, breakfast and lunch over two days, and the services of a local guide.

How to go from Bali to Komodo Island?

Labuan Bajo is the starting point for cruises to visit the Komodo Islands. There are two ways to get there: by plane, it’s fast, comfortable. Or by boat, but it is longer and the crossing can be dangerous.

A) From Bali to Komodo Island by plane, then ferry

What airline companies run services from Bali and Komodo Island?

If you are boarding an international flight, the island is accessible via Jakarta on the island of Java, or via Denpasar in Bali (DPS airport). From these 2 cities, you can then take a domestic flight to Labuan Bajo in Flores, this is the airport and the departure city for tours to visit the Komodo Islands. A flight from Jakarta to Labuan Bajo will take about 2.5 hours while a flight from Bali to Labuan Bajo only takes an hour.

B) Flights from Lombok to Labuan Bajo

Duration: 1 hour 15 minutes
Cost: fares start at IDR 703,000 (US$47.50)
For some years there has also been a daily flight from Lombok to Labuan Bajo, operated by Lion Air/Wings Air.

Less comfortable, long but more economical option: you can also get to Labuan Bajo by boat from Bali or Lombok and then by bus. But this alternative is not recommended because of the very fluctuating schedules, the length of the journey (36 hours minimum) and above all the discomfort and insecurity of the ferry.

Another alternative if you have more time is to take a multi-day boat trip from Lombok, an island just east of Bali. But this cruise is long with uncomfortable boats. On this route the sea can be rough and accidents have been reported in the past.

2. How to get around in Flores?

You can choose to take a day trip which will allow you to visit the islands of Rinca and Padar in 1 day with a departure in the morning and a return in the late afternoon.

If you want to visit more, as well as other more remote islands then you will need to take a 2 to 4 day cruise depending on what you want to visit. You will therefore live aboard a boat for several days and sail from island to island, alternating visits to islands, beaches, snorkeling spots, hiking…

Is it dangerous to visit Komodo?

As for Komodo… that’s another story! There have been accidents before and they are potentially dangerous wild animals. Indeed, their saliva contains many bacterias and their bite can be fatal. In addition, they measure up to three meters long, weigh 150kg (330 lbs) and can run at more than 20 km/h (around 12 mp/h). Generally it does not make you want to rub it too much.

However, if you listen carefully to the instructions and don’t mess around, you should be fine. Listen to the rangers, stay in a group and in Indian thread, don’t make noise or sudden movements, stay away from the Komodo (5 meters or 16 feet seems appropriate) and everything will be fine. If you are bleeding or having your period, it seems that you should report it, because blood attracts Komodo dragons.

Activities and excursions in Komodo Island

Komodo National Park is largely a scuba diving destination without too much tourist infrastructure. The attraction is rather the incredible nature, so it is possible to do other activities during your stay, or for non-divers, such as:

There are several travel agencies in Labuan Bajo that can arrange all of these excursions.

The Komodo dragons are undoubtedly the main attraction of the island. Disturbing and fascinating at the same time, going to meet these mythical animals will make you live unforgettable moments. Other animals also invest these places, such as buffaloes, wild horses and deer.

Komodo Island is part of Komodo National Park, a UNESCO World Heritage Site, in the Lesser Sunda island chain, Indonesia. It is famous for being home to the legendary Komodo dragon, the largest species of lizard on the planet.

It’s the only place in the world where you can see them in the wild, but Komodo has plenty more to offer. Komodo Island has amazing and varied landscapes – from white sand beaches to pink beaches, from tropical forests to grassy savannah hills.

It is also one of the best scuba diving destinations in Indonesia, with dozens of pristine reefs filled with colorful marine life. Along with over 1,000 species of fish, the waters around Komodo Island teem with whales, sea turtles, reef sharks and manta rays. 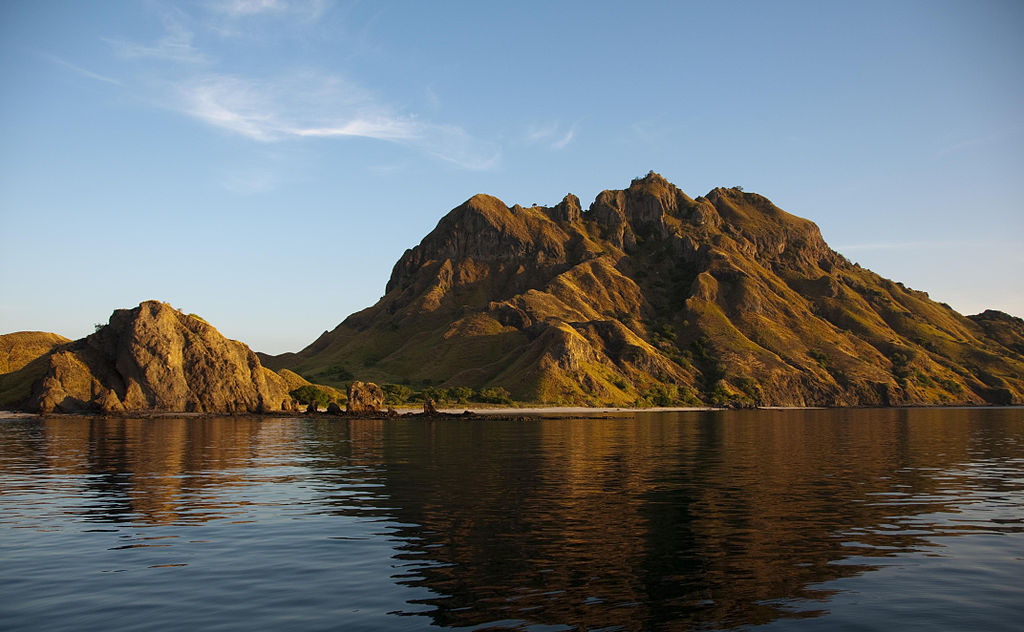 The many islands of Komodo National Park are scenic and varied and the magnificent dragons are found on four different islands: Komodo, Rinca, Gili Montong and Gili Dasami. In fact, Rinca Island is the best option for seeing dragons in the wild, as it is home to more Komodo dragons and is also closer to Labuan Bajo town, so easily accessible on an excursion. of a day with half a day of snorkeling on the reefs.

Planning to go to Komodo Island? It is quite easy to get there wherever you are in Indonesia. The first option is to fly to Labuan Bajo on the island of Flores and then take an organized boat tour to Komodo.

The second option is for more adventurous travellers: Take a 3-day, 2-night boat tour from the Gili Islands or Lombok to Flores with several stops (including Komodo) along the way. For many travelers, this is one of the best experiences of the whole trip to Indonesia!

Scuba dive to admire the underwater flora and fauna

Here is the list of the best dive sites on the island:

Manta Alley: this is the best place to observe the famous manta rays. This relatively shallow site, between 10 to 20 meters, allows you to maximize the time spent underwater and make the most of the aquatic spectacle.

Padar Island is one of several islands scattered in the Komodo National Park area, this island has a shape with several bays, white and reddish beaches and several beautiful hilltops.

Padar Island is covered with savannah hills. Steep volcanic mountains covered with bushes and meadows lead to deep bays with beaches of different colors, popular with divers. Its three main turquoise bays have stunning beaches: one is white, another is charcoal black, and the other is soft pink. The black beach has a volcanic origin, while the pink consists of red coral mixed with white sand.

The best time is April-June and also the dry season; September-November. July and August are very crowded and December to March is too rainy. Padar is about 30 km (20 ml) from Labuan Bajo, a fishing town on the westernmost part of Flores. Take a 30 minute hike to the top of Padar to see the whole island.

If you are eager to meet the famous Komodo dragons during a hike, then do not hesitate to discover the island of Rinca. Indeed, this island is the closest to Labuan Bajo (on the western coast of the island of Flores), the starting point for excursions to Komodo National Park. Unlike Komodo Island, Rinca Island is smaller with an area of approximately 196.25 km². The chance of seeing giant monitor lizards in their natural environment is then greatly increased.

It is worth remembering that komodos are wild animals and that they can present a certain danger if their tranquility is not respected. It is mandatory to keep your distance from the animal and to follow all the recommendations of your guide and the local ranger who will accompany you on the excursion.

The island which has an area of ​​about 32 hectares (80 acres) is approximately 15 km (9 miles) from Labuan Bajo (the capital of West Manggarai).

You can spend a day relaxing on the hammock, camping, playing beach volleyball, getting a massage on the beach, trekking to the hills, snorkeling, diving, or enjoying the view of the sky at night.

Kanawa Island from above (in the Komodo National Park). SunDawn, CC BY-SA 4.0, via Wikimedia Commons

Let’s be clear: if you’re expecting a flashy pink beach, you’re going to be disappointed. On the other hand, yes the sand of this page has a rather pink color, due to the presence of large fields of multicolored corals which are located offshore.

Apart from the giant lizards that give the park its name, Komodo National Park is also well known for its beautiful, undeveloped beaches. One of the most unique is Pink Beach (Pantai Merah), named for the pink sand that gets its color from weathered chunks of red coral from the nearby reef.

Clear, calm waters make the beach an excellent site for snorkeling, especially since the coral reefs just below the surface are home to hundreds of species of marine plants and animals. Located about 15 minutes by boat from Loh Liang pier, Pink Beach is a great place to relax in the sun or cool off in the water after a day of trekking in the national park.

There are 2 pink beaches:

The pink beach on Padar definitely has more colorful sand, but the Komodo pink beach has a nicer background for photos, with lots of steep hills and trees.

The park also has many lesser islands (island group); Such as Gili Motang Island and Nusa Kode Island.

The national park was established in 1980, with the aim of protecting the Komodo dragon (Varanus komodoensis) and cetaceans. The objective was later extended to protection of the flora and fauna of the region, including in the maritime areas.

The islands of the national park are of volcanic origin and 4,000 people live there. In 1991, the park was included in the list of World Heritage and Biosphere Reserve by UNESCO since 1977.

If you plan to go on a trip to Komodo Island, I advise you to invest in a good travel insurance that also covers scuba diving. You never know what can happen and good insurance can get you out of tough situations. I recommend this travel insurance because they offer worldwide coverage and cover many risky sports like scuba diving.

One of the natural charms of Indonesia in the province of East Nusa Tenggara is Padar Island, an exotic island with its natural marine beauty that offers a million natural charms.

Ready to book your villa in Seminyak center?

Located in Center Seminyak – Bali, Villa Carissa offers a private swimming pool and enclosed garden to guarantee your privacy. You can book your private pool villa here with us.