From Bali to Bandung

This itinerary from Bali to Bandung is made of unforgettable adventures and discoveries: ideal for holidays with family or friends!

Bandung is the 3rd largest city in the country, is today a renowned student, intellectual and technological hub. Geographically, the city is very large and is divided into two, to the south the industrial part and to the north the beautiful districts. A big crowded and noisy metropolis with a sometimes unsuspected architectural heritage (tropical Art Deco like Miami!). The city of Bandung is located in the Region West Java of the Country Indonesia.

How to go from Bali to Bandung?

There are many ways to get from Bali to Bandung by plane, bus, car ferry, train, night bus or car.

Flying is by far the fastest and easiest way to reach Bali from Yogyakarta to Bali. The flight takes less than 2 hours with tickets starting at IDR 1 600 000 (US$ 75). Note that this includes short taxi transfers to and from the airports, execpt for direct flights (it takes only 1 hour and 45 minutes.

If you feel like an adventure and have time for it, you can also take a combined train and ferry trip from Bali to Bandung. The trip takes at least 24 hours, through East Java and along the west coast of Bali, including an additional bus ride from the port to central or south Bali. The total cost is approximately IDR 780,000 (US$ 50). If you decide to go overland, we highly recommend visiting the Bromo and Ijen volcanoes as well as the Sewu waterfalls in Java.

It’s also possible to take the bus from Bali to Bandung, but it’s an uncomfortable 24-hour trip that involves several transfers and is often affected by delays. Long-distance buses can be very tiring and are not the safest way to travel, especially at night.

You may also try to go from Bali to Bandung with bus and train. It will take around 15 hours.

What to do in Bandung?

Here is a small summary of our short stay in Bandung (details in the previous paragraphs):

Many choices range from nature to city sights. Maybe I can recommend some of the tourist towns in Bandung.

We did some research if you want to visit Bandung or its surroundings, there are really a lot of things to do:

This place is filled with information about the past, present and future of Bandung. You can write your aspiration about Bandung in the future or just have a lot of aspiration there. The visit is free and open from Monday to Saturday from 9 am to 4 pm located in Jalan Aceh near Balai Kota Bandung.

This is not a place but a bus. Yes, Bandros is a bus that Bandung government has dedicated for tourists to go around and see Bandung. The bus itself is decorated with a single main color as the identity of the bus route. You can find this bus in Balai Kota Bandung near Taman Dewi Sartika and pay IDR 10,000 for one way, the bus also exists in other areas like Alun-alun Utara Bandung and I hear there you can reach Bandros free. But a friendly reminder, you need to get there in the morning around 8-9 to get the ticket.

This is the place to be in the evening; always very lively, bars, restaurants with live music, great for a night out… 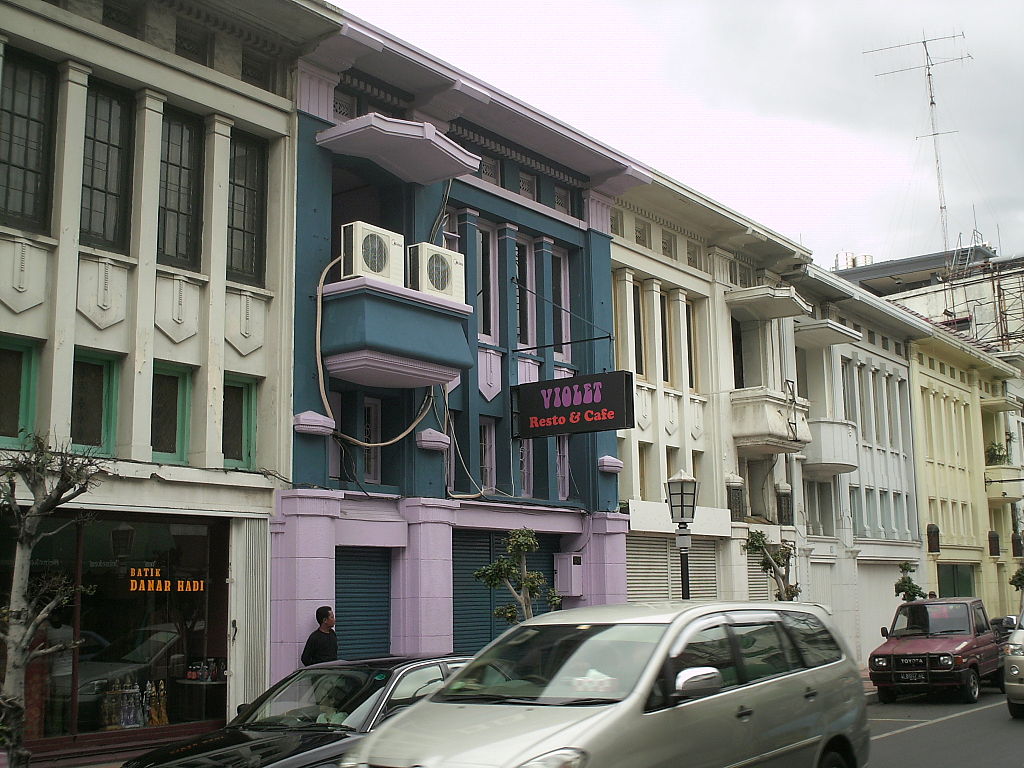 Old buildings (ca 1920s-1930s) at Braga Street in Bandung, some of which had been painted with young and trendy colors. Jagawana, CC BY-SA 3.0, via Wikimedia Commons

Gedung Sate is a public building in Bandung, West Java, Indonesia. It was designed according to a neoclassical design incorporating native Indonesian elements (such as Hindu-Buddhist elements) by Dutch architect J. Gerber to be the headquarters of the Dutch East India Department of Public Enterprises (Departement van Gouvernmentsbedrijven, literally ” Department of Government Industries”); the building was completed in 1920. Today the building serves as the seat of the Governor of West Java Province, and also as a museum.

Its common name, Gedung sate, is a nickname that literally translates from Indonesian as “satay building”, which refers to the shape of the central pinnacle of the building – which resembles the shape of one of the traditional Indonesian dishes called satay. The central pinnacle consists of six spheres which represent the six million guilders financed for the construction of the building.

This museum is located on Jalan Asia Afrika, in the Freedom Building which is locally known as “Gedung Merdeka”. It can be accessed every day except Mondays.

Gedung Merdeka, the museum of the Asian-African Conference in Bandung. Jagawana, CC BY-SA 3.0, via Wikimedia Commons

On Saturday towards the historical route Asia Afrika takes place the “Car Free Night”. Between 6 p.m. and 11 p.m., cars can no longer circulate and these give way to a huge crowd of pedestrians who organize shows as well as various activities of all kinds.

Get up early in the morning to spend a relaxing day in this orchid forest that is home to hundreds of the rarest varieties in the world.

Discover some essential places to visit around Bandung:

Getting to Tangkuban Perahu Volcano

30 km (18.50 miles) from the city center, discovery of the crater of the volcano located at an altitude of 2076 m. It is made up of a dozen craters that can be explored on foot. Passage through the thermal springs of Ciater, bordered by clove trees and tea plantations.

This picture shows the main crater of the Tangkuban Perahu volcano. To its south range lies the megacity of Bandung (Indonesia, island of Java). Glasreifen, CC BY-SA 4.0, via Wikimedia Commons

Kawah Putih (or white crater in English) is a surreal blue lake located in a volcanic crater about 50 km south of Bandung. A place that is out of the ordinary, the water is magnificent and an almost mystical place. Access by minibus only because on foot it is an hour’s walk. Be careful though, if you are asthmatic the place can be dangerous. The air quickly becomes heavy because of the omnipresent sulfur. We stay for just 10 minutes and already feel the effects of the sulfur on the body. Visit to be well prepared because it is quite cold.

When to go to Bandung?

The best time to go to Bandung is February, March, April, May, August, September, October, November. On the contrary, it is not recommended to visit Bandung in January, June, July, December for strictly climatic reasons (sunshine and temperatures in particular).

Over the year, the average temperature varies a lot. It is around 27°C.

There is usually 288 mm of maximum rainfall each year in Bandung.

Here are the seasonal normals observed in Indonesia for the months of December and January. Our advice is based on the combination of these historical data of seasonal normals, namely that a good rating indicates a pleasant temperature and little rain.

Ready to book your villa in Seminyak center?

Located in Center Seminyak – Bali, Villa Carissa offers a private swimming pool and enclosed garden to guarantee your privacy. You can book your private pool villa here with us.