Nusa Penida | Places Not To Be missed

Nusa Penida | Places not to be missed

Nusa Penida is the dream island which faces the east coast of Bali and which attracts more and more tourists year after year with its breathtaking views from its high limestone cliffs, its dream beaches, its lush jungle and its seabed inhabited in particular by Manta rays to meet while scuba diving or simply snorkeling.

The island of Nusa Penida is part of the province of Klungkung in Bali but is less developed than the mother or main island. In recent years Nusa Penida has been experiencing a craze from travelers looking for adventures, places less frequented by tourists or to swim with manta rays. This island is only beginning to emerge from its lethargy so if you want to explore it before its tourist boom don’t delay too long as change can happen quickly.

Nusa Penida is the largest of the islands of the archipelago which also includes the other two islands Nusa Lembongan and Nusa Ceningan. It has only been a few years since tourism has developed on this island, yet there are many spots, many activities to do and magnificent landscapes to see.

How to go from Seminyak to Nusa Penida?

The best way to get from Seminyak to Nusa Penida is by car, then by a ferry, it takes around 1 hour including transfers. Driver from Seminyak to Sanur Beach Port, then take a fast boat for 30 minutes ferry journey.

Locally known as Pantai Pasih Uug. It is a rock-like coastal formation found on the southwest coast of Nusa Penida. This place is marked by its formation in the shape of an arch where the waves of the Indian Ocean come crashing down. Broken Beach is a great spot for amateur photographers and those looking for scenic views. Adjacent to this place there are also macaques. Also if you are lucky you may be able to spot the silhouettes of these beautiful creatures that are manta rays swimming near the surface of the water.

In Nusa penida, access to Diamond Beach has to be earned: one of those descents to be done on foot, but this incredible little cove is worth all the effort.

One of the cultural attractions of the island. To go to this cave where there is a temple you will pass in front of signs indicating the direction all along the main street Ped Buyuk. An altar and a temple guard guard the entrance to this cave which is unique because to access it you have to go through a narrow opening in the rock. You will have to remember to lean enough to be able to access the cellar which is incredibly spacious, it is said that this cellar can accommodate up to 5,000 people. And no, it’s not dark down there as you might imagine because electricity was installed in this basement a few years ago. Several Hindu temples are present in this cave as well as one for the Buddhists. We come here above all to pray to ask for protection, prosperity but above all for spiritual purity. The Balinese believe that by visiting this cave they can cure illnesses.

It is a bay with 200 meters of white sand on the west coast of Nusa Penida. Despite its isolation, the bay is fairly well accessible thanks to its developed access roads. In addition to its beach full of palm trees, the bay is well known for its beautiful snorkeling site. Near the edge you can swim but you still have to pay attention to the currents that are present in Nusa Penida.

This source that flows into the sea is worth it! You will have to conquer more than 750 steps including 450 meters of vertiginous descent since the staircase in question is built along the cliff. It is better not to look down so as not to be seized with panic. Adventurous this waterfall is calling you!

Few people know this temple whose access is difficult. As you will have understood, the infrastructures of Nusa Penida are not yet fully developed, The Segara Kidul temple is located near the Peguyangan waterfall which we were telling you about just before and you will indeed have to take the 700 steps that lead to this temple. where is the statue of Kanjeng Ratu Kidul or also known as Nyi Roro Kidul who is the queen of the south sea and whose color is green. We believe that it is better not to wear green if we are at the seaside because we risk being carried away by a wave. There are also 3 altars at this temple intended for Vishnu, Brahma, Shiave and also a sacred spring where the Balinese take advantage of it to purify themselves.

If we talk to you about Teletubbies you probably remember these 4 characters for children and the sets of this show. And as the resemblance is obvious with these hills of Nusa Penida to those of Teletubbies they have therefore taken this nickname of Teletubbies Hills / Bukit Telettubies. It is better to go there in the morning or at the end of the afternoon so as not to suffer too much from the heat.

Temple Point or also known as Buddha Temple is located between Nusa Ceningan and Nusa Penida and it is one of a kind. At 7 meters deep were put there statues of Buddha and stupa. On a Buddha there is even an anemone which gives the impression that the statue has hair on its head. Sea lovers you will be enchanted by this spot!

When we talk about Nusa Penida this place is the one that have become the icon of this island. Photography lovers will be delighted. In any case, note that it is quite an adventure to go down to the beach and especially to go back up.

A magical place that awaits you with this magnificent infinity pool and its captivatingly colored waters. But don’t be fooled by the beauty of this pool, which can be dangerous. Indeed some people have already died there by being carried away by a wave without any chance of surviving because of the strong currents. We therefore advise you not to risk your life just for a photo… 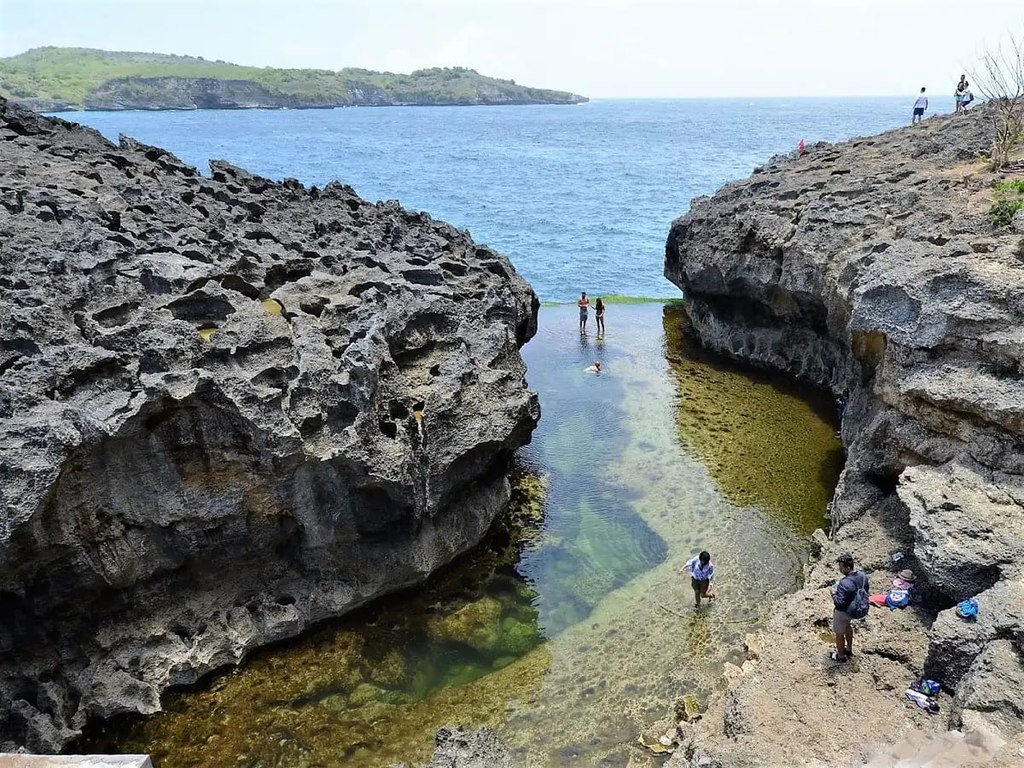 This village is located in height, the road which leads to it is something but it deserves to be seen. Life in this beautiful village is peaceful. You can see the women weaving at home, a job that sometimes requires several months of work to complete.

Another beautiful beach in Nusa penida that some compare to Dreamland beach in Bali. Like many beaches in Nusa Penida there is still a staircase to access it, in any case it remains uncrowded.

A unique and interesting place with its 2 cars placed there in this temple and act as altars. What might look like cars are not, it’s just the shape given to these altars made of stone. Discover the history of this extraordinary temple!

Located at the viewpoint of the Thousand Islands this place is one of the attractions of the island and is not far from Atuh beach. This house is known thanks to the photos on Instagram that were taken in this place. To know that this house can be rented but that you should not have high expectations as to its comfort or cleanliness, you have been warned.

One of the reasons why travelers like to go to Nusa Penida: to try to swim with manta rays while snorkeling or diving. The Manta Point is in fact the area’s manta ray cleaning station, but as they are wild animals it is not guaranteed that you will be able to see them all the time. Also to know that there is current at this place, we advise you to organize your sea trip to this spot with real diving clubs even if it will be a little more expensive than taking a local with his boat . Safety is priceless and we have already had clients who have snorkeled at Manta Point just passing by a local with his boat and told us that they feared for their safety in the water because of the currents and the non-supervision of the organizer of this excursion.

The Ped temple is the best known temple in Nusa Penida it is also known as Pura Penataran Agung Ped, it contains a shrine dedicated to Jero Gede Macaling. It is a source of power for those who practice black magic and a place of pilgrimage for those who seek protection from evil and disease. The legend says that anyone who prays or meditates at this temple will receive balance between the corporeal world and invisible world.

It is a place that is great for a nice hike and offers a beautiful view of nature as well as a tranquil atmosphere. If you enjoy walking Tembeling Forest is the perfect choice for you, the descent is through thick, green vegetation and the forest is filled with the melodious calls of native birds. After arriving at the end of the path you will be rewarded by bathing in the pools. Tembeling Forest has 2 pools one spiritual and another for men and one for women. If you go even further at the end a beautiful beach will appear and you will not want to leave.

Adrenaline lovers, this stunt is made for you! Small reward at the end of this dangerous staircase the waterfall and the view of the sea.

Ferry companies and ports of arrival in Nusa Penida

If you have already booked your speedboat ticket, you can check below which boat company arrives at which port in Nusa Penida.